When They Got the Call: PW Speaks with the 2018 Newbery, Caldecott, and Printz Winners

Posted on 16 February 2018 Categories: Awards and Grants, Children's Books, News No comments yet

Erin Entrada Kelly has won the 2018 John Newbery Medal for her novel Hello, Universe (Greenwillow), edited by Virginia Duncan. Matthew Cordell has won the 2018 Randolph Caldecott Medal for Wolf in the Snow (Feiwel and Friends), edited by Liz Szabla. And Nina LaCour has won the 2018 Michael L. Printz Award for We Are Okay (Dutton), edited by Julie Strauss-Gabel. The awards were announced this morning at the American Library Association’s midwinter conference in Denver.

The Hate U Give won three other prizes, including the William C. Morris Award, for a debut book published by a first-time author writing for teens, and the Odyssey Award, for excellence in audiobook production. Jason Reynolds won both a Newbery Honor and a Printz Honor for his novel Long Way Down.

The Laura Ingalls Wilder Award, which honors an author or illustrator whose books have made a substantial and lasting contribution to literature for children, went to author Jacqueline Woodson, the current National Ambassador for Young People’s Literature.

The William C. Morris Award for a debut book published by a first-time author writing for teens was given to The Hate U Give by Angie Thomas (HarperCollins/Balzer + Bray). Four other books were finalists for the award: Dear Martin by Nic Stone (Crown); Devils Within by S.F. Henson (Sky Pony); Saints and Misfits by S.K. Ali (Salaam Reads); and Starfish by Akemi Dawn Bowman (Simon Pulse).

The YALSA Award for Excellence in Nonfiction for Young Adults went to Vincent and Theo: The Van Gogh Brothers by Deborah Heiligman (Holt/Godwin). Four books were finalists for the award: #NotYourPrincess: Voices of Native American Women, edited by Mary Beth Leatherdale and Lisa Charleyboy (Annick); Eyes of the World: Robert Capa, Gerda Taro, and the Invention of Modern Photojournalism by Marc Aronson and Marina Budhos (Holt); The 57 Bus: A True Story of Two Teenagers and the Crime That Changed Their Lives by Dashka Slater (FSG); and The Whydah: A Pirate Ship Feared, Wrecked, and Found by Martin W. Sandler (Candlewick).

Piecing Me Together by Renée Watson (Bloomsbury) won the Coretta Scott King Author award and the Illustrator award went to Ekua Holmes for Out of Wonder: Poems Celebrating Poets, written by Kwame Alexander with Chris Colderly and Marjory Wentworth (Candlewick).

Three King Author Honor Books were selected: Crown: An Ode to the Fresh Cut by Derrick Barnes, illustrated by Gordon C. James (Bolden/Denene Millner); Long Way Down by Jason Reynolds (Atheneum/Caitlyn Dlouhy); and The Hate U Give by Angie Thomas (HarperCollins/Balzer + Bray).

The Stonewall Book Award, given to children’s and YA books of exceptional merit relating to the gay, lesbian, bisexual and transgender experience, had two winners: Little & Lion by Brandy Colbert (Little, Brown), and The 57 Bus by Dashka Slater (FSG). There were two Stonewall Honor Books:As the Crow Flies by Melanie Gillman (Iron Circus Comics); and The Gentleman’s Guide to Vice and Virtue by Mackenzi Lee (HarperCollins/Katherine Tegen). 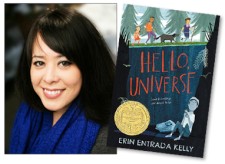 By 8:30 Eastern time Monday morning, Erin Entrada Kelly figured she was facing an ordinary day. But once she was in her car and driving to work, she received a text from her editor, Virginia Duncan, saying that a call would be coming soon and she should pick it up. That’s what Kelly did, and the Newbery committee was on the other end of the line, sharing the news that her novel, Hello, Universe, had won the Newbery Medal. Kelly recalled, “I think my exact words were, ‘What? Wait, what?’ “

A Sleepless Night, A Joyous Morning: Matthew Cordell on Winning the Caldecott

Matthew Cordell did not sleep well on Sunday night. He’d been in this position once before—as creator of a book (hello! hello!) that was getting some Caldecott buzz—and he dreaded the prospect of another winter Monday waiting for a phone call that never came. Then, at 7:30 in the morning, the phone rang. The voice on the other end belonged to the chair of this year’s Caldecott Committee, who announced that Wolf in the Snow had won the Caldecott Medal. Cordell’s response: “Do you mean the gold one?”

Back to Work After an ‘Otherworldly’ Day: Nina LaCour on Winning the Printz Medal 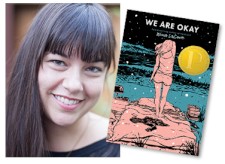 Though We Are Okay author Nina LaCour received word of her medal from the Printz committee on Saturday morning, in some ways she has not yet touched down from the elation. Describing the moments before getting the news, she said, “I was just changing the sheets on the bed, and doing some chores at home. I didn’t expect a call at all. It was incredible. I answered and was told it was the Printz committee.” The overall feeling, she said, was one of disbelief. “I spent the whole phone call wondering if it was really happening.”